We believe that the road to building a sustainable company is paved with learning. We often ply this road, and last week in Mobnia, we had cause to study an interesting tech company founded by a brilliant African woman - AppsTech. Our sprint ended with the reward of nine (9) lessons shared in this post.

Right after this brief introduction...

In 1982, Rebecca Enonchong was only 15 years old when she moved to Uncle Sam’s land of opportunities to pursue the American dream. And being a passionate young woman with interest in democracy, peace and human rights, 17-year-old Rebecca would participate in a “Free South Africa” demonstration in Washington D.C., only 45 minutes away from Maryland where she would found her company, AppsTech.

After earning a Bachelor of Science and Master of science degree from the Catholic University of America, a prolific career in financial systems followed. It was during this spell that Rebecca was exposed to something that fascinated her very much - software technology.

Reflecting on how quickly Rebecca’s appreciation of technology translated into mastery of enterprise software applications, it can be argued that years before Cal Newport advocated for Deep Work (which we practice at Mobnia) - and the skill to master hard things quickly; Rebecca made a seamless career switch by devouring software application manuals from cover to cover, to attain expertise in installation and handling of enterprise applications. Deservedly, she gained recognition as a domain expert in Oracle products (becoming an early Oracle Financials certified instructor).

When Alleygius - a consulting firm subcontracted a staffing operation for Global One to Rebecca and other subcontractors in '99. She would speak to her friend about the opportunity and be rewarded with the suggestion to sign the contract as if with a company and not a person - AppsTech was incorporated soon after.

Lesson 2: Build around what you know best

AppsTech was unquestionably built around what Rebecca knew best, helping organizations set up and run financial and enterprise resource planning. And as expected, AppsTech took on new consulting projects. However, these earlier jobs were staffed with subcontractors, some of whom later joined AppsTech as full-time employees.

Interestingly, Rebecca would go on to recruit some of the earliest employees from her network of ‘good students’ from her training years.

AppsTech revenue flowed from two main streams - implementation of financial systems (Oracle products) and application management services (database maintenance contracts). And about 2 years after AppsTech started, Apprio inc. was acquired for its Application Service Provider (ASP) expertise. 90% of AppsTech's customers used its application management services which offered low margins compared to systems implementation. In fact, 30% of their customers had long-term contracts with AppsTech - this provided a cushion through the economic hard times of early 2000’s.

Lesson 4: Have the full picture in mind, start work, then fake it till you make it

For instance, during the early days when it was just Rebecca and the subcontractors. The global vision impressed a client who came in from France to see a “call center” filled with some computers (and staff). With the help of these borrowed staff and computers from neighboring offices, AppsTech won the contract!

Secondly, Rebecca lived by a conviction to build a sustainable global business, with globally-minded employees. AppsTech wasn’t going to reach for the low-hanging fruit so she set out from the outset to compete based on merit and competence. AppsTech was built to be better than everyone else in their space and this was only going to be possible through hard work and perseverance. Often times, Rebecca would concern herself with nothing else but her business, sleeping with her computer and responding to emails across time zones - she’d once said... ‘a global business never slept’.

Rebecca believed that success with AppsTech rested on a keen sense of the competitors next moves. So, she watched them like a hawk, spending 1-3 hours daily on competitive analysis. And frequently, checking domain names registered by AppsTech’s competitors. Fortunately, she’d been in political circle and picked up the uncanny ability to watch the opposition. A skill which proved useful in business.

Lesson 6: Have a Focused Strategy

“Where there is no vision, the people cast off restraint” - Proverbs 29:18

In firms with a robust technical skill set, the temptation to be opportunistic is greater when there is no driving vision. Rebecca resolved that AppsTech couldn't afford to be opportunistic despite the many profit possibilities made available by the firms' robust technical skill set. During lulls in business, AppsTech did not explore non-expert job opportunities even when similar firms appeared to be full-service, one-stop shops; AppsTech stuck to doing one thing and getting it right.

Lesson 7: Decide on how much pressure you can take, and how fast you wish to make decisions

Again, Rebecca’s ability to understand her business environment informed the decision not to take on the pressure of external debt nor dilute her equity control of the firm by accepting venture capital funding. Thus, the firm grew organically with reinvested profits. As a matter of fact, the 2001 acquisition of Apprio was paid for with cash. And thanks to AppsTech financial controller at the time - Patricia Gbeti, expenditures were scrutinized and strict processes were in place to force employees to make efficient decisions.

Rebecca would often put employees on the spot, testing them about their software knowledge in the hallway. So high were her expectations of a high level of discipline, excellence, and work ethic. Being the daughter of a Cameroonian chief, she most likely adopted these attitudes and behaviours from her father.

==“In any situation, the realm of possibilities far exceed what is apparent” - Rebecca Enonchong

Like their leader, AppsTech employees had a triumvirate power of business knowledge, product knowledge, and global knowledge. Also key is open-mindedness and ability to disagree without animosity. AppsTech workforce treated each other as a second family and to prevent layoffs during the recessions of early 2000’s, they unanimously decided to cut individual benefits packages instead of AppsTech funding for philanthropic endeavours in Africa.

Lesson 9: Work matters because it gives you the power to leave the world better than you found it

Remember, the “Free South Africa” demonstration mentioned at the beginning of this article? It earned Rebecca an arrest at 17. Till date, Rebecca is an active member of African and Cameroonian communities in the USA. Duly noted by international media and Cameroonian media, Rebecca remains a strong supporter of democracy, peace and human rights.

==“The power of technology excites me almost as much as a good meal. The desire for all to have a good meal drives me harder” - Rebecca Enonchong

The key to turning your product into a cash machine lies in unlocking recurring revenue in a good market. While there are several pragmatic revenue models and steps to recurring 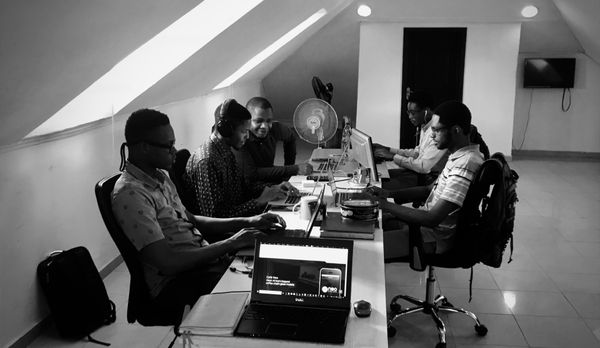 Coders at Work: Reflections on the Craft of Programming, written by Peter Seibel is a recommended book for software developers at Mobnia, and as I picked it up recently I